Fill in the form

Our search tool will help you find the perfect course for you and your business.

Payment
For online payments, course fees are payable in full at the time of booking.

Places on courses arranged by Sanctus Training Limited or a third Party Partner are strictly limited. Courses are only provisionally booked until full payment has been received, therefore, a place is not guaranteed until payment is received.

All courses fees must be received 14 days before course date.

Please note, no Training Certification or Cards will be issued prior to receiving full payment.

Cancellations are to be made in writing. If the Buyer wishes to cancel/ postpone a course, the following policy will apply unless agreed by prior arrangement:

Alternatively, a candidate can be substituted up to 24 hours before the start of the course.

If the alternative date is not suitable a full refund will be provided.

In the event that a payment is to be refunded, Sanctus Training Limited will endeavour to process all refunds as quickly as possible. Refunds can only be made to the card account or bank account from which the refundable payment was made.

In the event of a candidate failing an assessment, it is the responsibility of the candidate to arrange the date and payment for the reassessment direct with the Course Tutor/Company.

Temporary works are the parts of a construction project that are needed to enable the permanent works to be built.

Temporary works are usually safety and business-critical and require careful co-ordination. An accepted way of achieving this is through the adoption of the management process outlined in BS5975 which introduces the Temporary Works Co-ordinator as a key figure.

This two day course explains the role and the overall management context within which it sits.

The one day Temporary Works Supervisor course is designed to assist those on site who have responsibility for supervising temporary works and will allow the Supervisor to:

High risk can occur on small as well as larger sites hence understanding the essentials of good safety risk management, as outlined in BS5975, is relevant for projects of all sizes.

Sanctus Training Ltd is an accredited CITB Centre offering Temporary Works Coordinator and Supervisor training as part of the suite of Site Safety Plus courses.

The South West Working Well Together Group of which Sanctus Training are a member, are today holding a free event at Bridgwater College Construction Skills Centre at Cannington.  We are enjoying being on hand to offer help and support with training within the construction industry.

Learn what training you need if you are working with or due to work with Asbestos – Sanctus Training is an accredited UKATA Asbestos training centre.  If you are in the HVACR or Electrical industries, we offer a range of accredited courses to assist you on your career journey.

The South West Working Well Together Group covers the counties of Gloucestershire, West of England (formerly Avon), Wiltshire, Somerset, Devon, Cornwall and Dorset and operates in partnership with the Health and Safety Executive (HSE) and are supported by many of the UK’s major contractors to promote good health and safety standards to smaller construction businesses.

The aim is to achieve a reduction in all accidents at work and to reduce the number of cases of work related ill health across the South West, and to do this by running events that:

The drivers for the events are:

A steel coating company has been fined for failing to manage the risks from legionella bacteria at two cooling towers over a period of five years.

Newport Crown Court heard how in February 2014, the Health and Safety Executive (HSE) visited the company in Newport, Gwent and found it had been operating two cooling towers on site without taking appropriate measures to control the risk of proliferation of the bacteria since 2009.

The risks from the operation of the cooling towers had not been assessed, there was no written scheme, the towers were in poor condition, drift eliminators to reduce the spread of aerosol were missing, there was no water treatment programme in place and staff had not been trained to appreciate and manage the risks.

Prohibition Notices were immediately served by the HSE inspector that prevented the cooling towers being used until all appropriate controls were put in place. Improvement Notices were then served with regard to risk assessment and management.

The HSE Inspector said: “Operating cooling towers, without proper controls in place can present a significant risk to employees and members of the public; in this case the company operates next to a housing estate and within one kilometre of the Royal Gwent Hospital.”

The Sanctus Training team extended a warm welcome to their customers at an open event recently.  As part of their awareness campaign, Guests were invited to their training centre in Cam, near Dursley, Gloucestershire to hear presentations on training topics which included HVACR, Electrical, Asbestos and Health & Safety.

The event is part of a roll-out to broaden awareness of what the company offers across training and consultancy and to highlight a number of new developments. Customers had the opportunity of a walk-about around the site to see for themselves the hands-on, practical environment which is a feature of the Cam site.  Newly upgraded Electrical training bays, a purpose-built Asbestos training facility, HVACR units and classroom facilities ensure that a broad range of training courses including a number accredited through the CITB, City & Guilds and UKATA can take place.

The importance of appropriate Asbestos training was stressed by Dan Ingram, Asbestos Manager who talked in detail about the dangers of this hazardous material and highlighted the UKATA Asbestos Awareness and Non-licensed work with Asbestos training that is offered.

Guests also learned about the recent rebranding exercise that has taken place to give the Training business a contemporary and distinctive new look as well as the launch of their brand new easy to navigate website.

Guests came from within the Construction and HVACR industries, along with representatives from Training Groups, Colleges and joint working Partners.

Sanctus Training Staff and Trainers would like to warmly thank all their guests who came along to learn more about what is on offer. 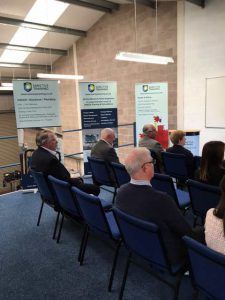 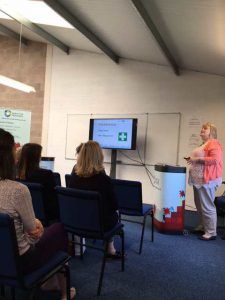 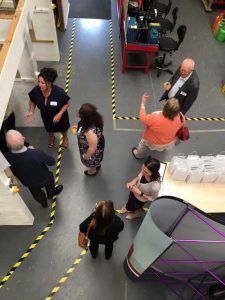 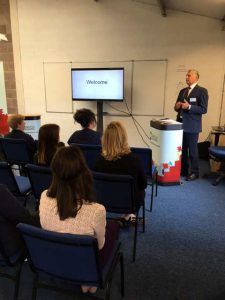 We look forward to welcoming existing and new clients alike to the Sanctus Training Centre in Cam on Thursday 2 June to share our new developments and offer the opportunity to walk around the site highlighting the facilities which include:

You will have a chance to meet and chat to our Trainers and Staff about any Training needs you may have, and of course enjoy lunch with us too.

If you’re coming along – start time is 12 noon, please feel free to join us a little earlier for a cuppa.

We look forward to seeing you.

UKATA Management of Asbestos in Soils & Made Ground

This website uses cookies to improve your experience while you navigate through the website. Out of these, the cookies that are categorized as necessary are stored on your browser as they are essential for the working of basic functionalities of the website. We also use third-party cookies that help us analyze and understand how you use this website. These cookies will be stored in your browser only with your consent. You also have the option to opt-out of these cookies. But opting out of some of these cookies may affect your browsing experience.
Necessary Always Enabled
Necessary cookies are absolutely essential for the website to function properly. This category only includes cookies that ensures basic functionalities and security features of the website. These cookies do not store any personal information.
Non-necessary
Any cookies that may not be particularly necessary for the website to function and is used specifically to collect user personal data via analytics, ads, other embedded contents are termed as non-necessary cookies. It is mandatory to procure user consent prior to running these cookies on your website.
SAVE & ACCEPT